In a world were everything is settle in a good fight. Every warrior fight for his personnal reason. But most of them are in the Fighter League to obtains Gold, Gears and Fame! Some have other reasons to fight: To avenge a friend, to find a rare object, for love or just for the fun of the furious battle! The Architect is the master mind behind the Fighter League and the Colosseum. He have both the intellect and the power to build all the differents Leagues and the Hall of Champions where the fighters who have succeeded the test of entry meet and prepare themselfve for the challenge made by the Architect.

You follow Henry Forge, who just decide to enter the Fighter League. He have a mission he want to accomplish for his family in the League. Fight, learn, and meet comrades on your way to the top leagues. An adventure where choosing and developping the right members of your team really matter to be victorious in battle!

Henry Forge: A high skilled fighter who just by is family name makes monsters and hunters shake their legs and run away from him. The Forge family is one of the greatest who rule over the Fighter League for decades. Henry pass all is time talking and training at combat. He wants to prove to his whole family that he deserve to be in the top spot in the Fighter League. Nothing will stop him to achieve his goal, not even is family.

Old Sage: He is the one who guide the new warrior inside the Fighter League. It is said that when he was young, he was one of the prime fighter inside the Colosseum, but after some event he was banish from the leagues and could only serve the Architect

Charles (Chakal) Titum: An old friend of Henry, who try his chance at the Fighter League to become the youngest warrior to achieve the Elite Striker Rank in the Colosseum. Charles know his good and can make precious allies that will help him to reach the top. He skills are above normal with magics and other powerfull spell.

Emil Langus: He wants to heal the world and make it a better place. But Emil decide to start with the Fighter League where he try to heal as much as he can to help all the fighters who get harm fighting in the Colosseum. Emil don’t like to stay lonely. He always look to meet some new people and get to know them. He have a bright future in front of him if someone is giving him a chance to shine.

Rachelle Cold: Rachelle wears her name well, because she not the type to like people and get their attention. But she is determine to keep climbing all the differents leagues and challenges of the Colosseum to find the killer of someones really precious to her. She will not stop her adventure until the one is found and buried for good and ever. Her spear and spells of ice and cold will help her achieve her goal.

Karl Mort : Younger brother of the Explosive Mort Duo Fighter, Karl is a free style fighter who prefer fighting with his fists than any other weapons. He is quite short on temper but he is a nice compagnon to have around you. His goal is to fight the Architect in person and take his place and become the new master mind behind the Fighter League.

Sephia Mort: Older sister of the Explosive Mort Duo Fighter, Sephia is a fire warrior who use all the rage and heat she have inside her to fight without fear and win any combat she engage. She want to prove that any female fighter can be has good has any man or monsters. With her sword and rapid abilities she can become a fire tempest that nothing can stop.

Architect: The one who made everything. The Hall of Champions, the Fighter League, the Elite Striker, the event and everything is the work of this genius. We don’t why he create the Fighter League and if he going to stop creating new challenges for the fighters who come from all around the world to try his tests. Only few have see him in person. Some say his a god other say a ghost.

and a lot of others characters you will need to discover in the Leagues.

In the Hall of Champions, proceed through the different league and fight monsters to progress to the Top League made by the Architect. 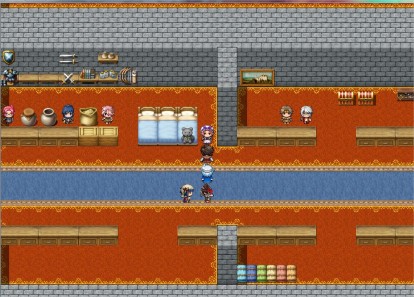 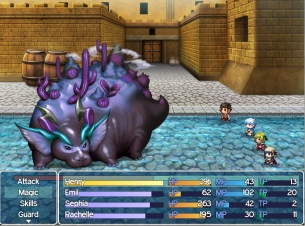 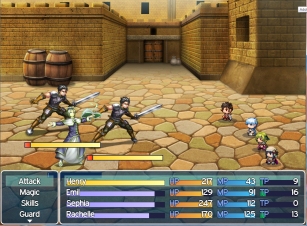 Media (video, trailers or others)

Please let me know if you find any bug of that the game crash at certain point. The more info you could give me to point where the crash and the bad behaviour can happen please let me know!

But I want to say a HUGE thank to Yanfly(go support him) and all his great plugins that makes my game really great. And I want to thank all the community of RPG Maker that help me improving my game to craft the best Fighting RPG we can together! Thank All for your supports!

Thx to all the community and a BIG BIG ULTIMATE Thank to Yanfly for his work. Go support him!

Continue working on the next league and some background and story elements. Polish encounters, new NPC, new characters, new Skills. I will update when I push a new version of the game with even more content.

Can’t wait to have your comment about my demo and project in general. I hope I can make something fun for everyone!